This Match Belongs to the Copa Italia Final and we are deciding Fiorentina vs Juventus Prediction for today’s match.

This would be a hard and long tie since the two clubs are strong team from the Italia league.

The Viola will look to avenge a 2-1 setback to Sassuolo in Wednesday’s match, but they will face yet another difficult assignment. Lucas Martinez Quarta has been suspended for the encounter, while Nikola Milenkovic, a key defender, has returned after serving his one-game suspension over the weekend. 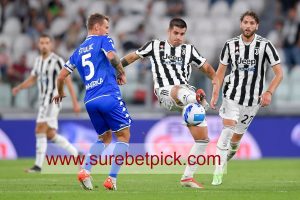 In contrast, Juventus continues to rely on January transfer Dusan Vlahovic, who scored a brace in a 3-2 win over Empoli. At the moment, the Serbian rising star appears unstoppable, and he will undoubtedly be a headache for his former teammates.

As we always wants our visitors to make money while betting, the prediction for this match between Florentina And Juventus is BTS OR GG.