The football match between Gil Vicente and Porto will take place at Estadio Cidade de Barcelos on Friday and the prediction is to be known now.

The hosts had a promising start to the season, but they are now winless in four games in the Primeira Liga ahead of Porto’s visit. Georgia international Giorgi Aburjania is pushing for a starting spot after scoring a late equalizer in a 1-1 draw with Belenenses, while Afonso and Leautey are still recovering. 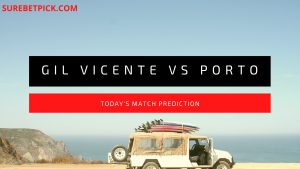 On the other side, the Dragons are on a mission to reclaim the domestic title. We expect Porto to take an attacking style in Friday’s match because they are four points behind league leaders Benfica in the Primeira Liga standings.

In the away team, Iran international Taremi, who scored a brace in the 5-0 thrashing of Moreirense, will be the man to watch. In any case, the away win should be taken into account, given Porto has had a strong start to the season.

With forward Toni Martinez returning from suspension, goalkeeper Agustin Marchesin should be the lone absentee in the away team.

So the match prediction between Gil Vicente vs Porto will be Over 1.5 with Porto FC leading.