When Leicester City and Manchester United meet in the Premier League round of eight, all eyes will be on King Power Stadium.

The Foxes will be looking to halt their four-game losing streak, but they will have a difficult task on their hands in Saturday’s match. In the home team, Jamie Vardy, who is not getting any younger, will be the man to watch, while Justin, Fofana, Ndidi, and Mendy are still in the recovery room.

The Red Devils, on the other hand, have had their ups and downs recently, with victories over West Ham and Aston Villa, as well as a draw with Everton. 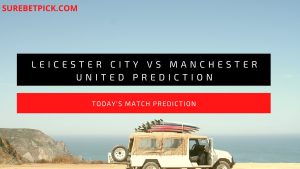 Man Utd are desperate to get back on track, and with both teams aiming for victory, we believe there is a lot of value in betting on both teams to score.

Cristiano Ronaldo is back in the starting lineup, while Marcus Rashford is still on the mend and will miss Saturday’s game. Harry Maguire is a significant question mark.

The Prediction for Leicester City vs Manchester United today is BTS, Both teams to score.