The Man Utd vs Man City Prediction is not an easy one as these two teams are strong heads even though Manchester united has been flopping for sometime now.

When Manchester United and Manchester City meet in the Manchester derby on Saturday afternoon, there will be fireworks. The Red Devils have rapidly recovered from a 5-0 loss to Liverpool, outplaying Tottenham 3-0 in their most recent league match.

With the victory, Ole Gunnar Solskjaer’s job as Manchester United manager was saved, and the players regained much-needed confidence. Cristiano Ronaldo, who scored in the 3-0 triumph over Spurs, will be a player to watch in the home team, while Paul Pogba remains on the sidelines due to suspension. 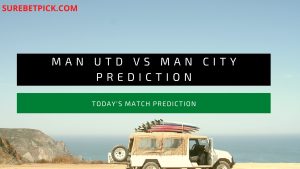 The Citizens, on the other hand, were humiliated by Crystal Palace in front of their own fans, losing 2-0.

Pep Guardiola’s side will be looking to get back on track as quickly as possible, and given that they will also be looking to win at Old Trafford, the both teams to score betting option should be explored. Ilkay Gundogan is pushing for a starting spot, while Ferran Torres is still recovering in the hospital.

Man Utd vs Man City Prediction for today’s match is 12, that is anybody to win and at same time we might see a draw.