Man City will try to put more pressure on league leaders Chelsea when they welcome West Ham United at their Etihad Stadium after a 3-0 win over Everton at the weekend.

The Citizens are aiming for their third straight league victory, and they are likely to continue their attack-minded strategy.

Kevin De Bruyne, Jack Grealish, and Ferran Torres are all still recovering, but Gabriel Jesus of Brazil is pressing for a start. 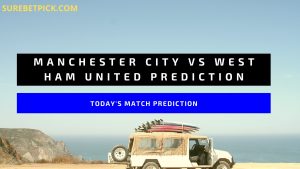 The Hammers, on the other side, were defeated 1-0 at Wolverhampton, with Raul Jimenez scoring the game’s only goal to stop their four-game losing streak.

David Moyes’ side has lost each of their last four encounters with Man City at Etihad Stadium, which is even more reason to contemplate a home win. The only players missing from the away team are Ogbonna and Reid.