The active coach of the Tottenham football club has confirmed that Cristian Romero will be moving to be with them permanently on June.

w should all recall that Cristian Romero is currently on loan at the club now, but the coach has made it clear that they will make it permanent.

“Cristian Romero will be our player on a permanent deal in June. He’s on loan but we have an obligation to buy. We already bought him from Atalanta”. #THFC “Romero’s perfect for Premier League football”, Conte added. 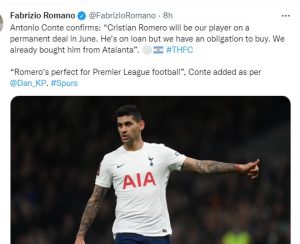 Seems the coach  have faith on the player that much. lets wait and see how this turns up.