James Rodriguez Has accused Real Madrid of  not letting him to be with his family in Atletico Madrid.

In his speech he says that the deal was already settled and he was happy to join his family at Atletico, then Real Madrid didn’t allow me to Leave.

“Everything collapsed because Real Madrid didn’t allow me to leave”, he added.

James Rodriguez confirms he was “one step away” from joining Atletico Madrid few years ago: “Yes, it was almost done. I wanted my family next to me, the deal was set to be completed”. 🇨🇴 #Atleti 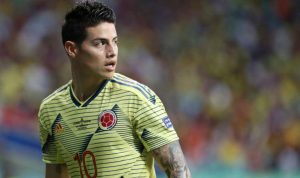 “Everything collapsed because Real Madrid didn’t allow me to leave”, he added.

We Should also recalled that he rejected Bayern Munich in his days, Many people are of the opinion that he would have won champions league if he had joined Bayern Munich.